I was in the third grade and moved to a new town in the middle of the school year.

But I did my best to make it work.

Although, the calculator watch wasn’t a big help.

With the usual “stand in front of the room and introduce yourself to the class” stuff behind me, it was time for lunch on my first day of school, followed by recess.

If the idea of lunch and recess did not just make the hair on the back of your neck stand up, there’s an excellent chance that you were the reason the rest of us are still traumatized by our grade school years.

It all started fairly innocent.

The most popular girl in our class came up to me while on the playground and introduced herself.

And then it took an odd turn.

I stood there for a second, trying to digest what she just said. Not realizing the verbal punch in the face I was about to receive.

And then she laughed and high-fived all of her friends as they stood behind her. Offering their moral support.

I turned around, and there was nobody there to back me up. To support me. To tell me that it wasn’t true. Or that she was mean. Or that she said stuff like that to everyone.

So, she must be right.

They eventually walked away. Leaving me there to finish telling the story that she had started on my behalf.

And I did a great job of it.

Those two words would define the next twenty-five years of my life. Constantly being whispered in my ear at times when I was the most vulnerable.

Should I try out for the basketball team? (pretty ugly)

Who should I sit with at lunch? (pretty ugly)

Should I ask that girl out? (pretty ugly)

I may not have said them aloud, but they were always there. Right in front of my nose. Until I got so used to them being there that they just became a part of my identity.

It wasn’t until many years later that I found myself at a seminar. Paired up with a girl sitting next to me and a challenge to share something difficult from our past.

I was forced to go first.

I began to tell her the origin story of “pretty ugly.” It was the first time I had ever told the story out loud to anyone. Including myself. And while I walked her through the chain of events that lead to me being the insecure adult standing before her, she just stood there and smiled.

I stopped in the middle of the story. I was angry. I was offended. I was not going to let her enjoy the pain I was in. Even though it sounded so ridiculous for a grown man to be so hurt by those two words spoken by an eight-year-old twenty-five years earlier.

But before I could say anything, she jumped in.

“I’m sorry. I don’t mean to make light of your story. I’m just so relieved.”

She then went on to tell me a similar story. When she was a kid, her father would joke about her being an “airhead” because she had a very bubbly personality. And for most of her life, she thought she was stupid.

Her father didn’t mean it. It was all in good fun. But the damage was done.

We spent the next thirty minutes talking about the similarities in our stories and even dragged a few of our neighbors into the conversation. At that moment, I realized I had been alone in a room full of people who had the same experience growing up.

I began sharing that story with anyone who would listen.

Years later, I was asked to speak at an event on Anti-Bullying Day to tell that story again. Over 1,000 people in the audience listened as I shared those two words that had paralyzed me for years earlier. And when I got done, there was a line of people that started outside of the room and ran up to the stage. It was a line of people who wanted to share their “pretty ugly” story with me.

Some of the details were different. Maybe it was a teacher or a parent or a boss instead of a little girl. And maybe they were called stupid or lazy or fat instead of pretty ugly. But what they all had in common was that something was said to them, and they took that story and ran away with it until it became real.

The video of that talk was posted online where I shared it on Facebook, not realizing that I was now connected to many of the kids in that third-grade class.

Most of the comments I got were in support of my choosing to tell that story in a public forum. There were also a few people who shared their experience, which was similar.

And then I felt a ping in my chest when I saw her name.

The girl who had started this whole thing had left a comment.

Was she going to fight me on it? Maybe apologize for her role in it? Tell me to get over it?

I took a deep breath and read her comment. She thanked me for sharing such a deeply personal story and was proud of having the guts to put it out there.

It was clear from her comment that she didn’t remember ever saying it.

Those two words changed the course of my life, and the girl who said them to me didn’t even remember saying them.

I couldn’t believe it.

I had blamed her for so long. All because of two words that she said as a dumb joke when she was eight years old.

What I didn’t realize is that she only said them to me that one time.

I was the one who chose to repeat them thousands of times over the years that followed. 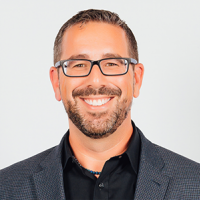